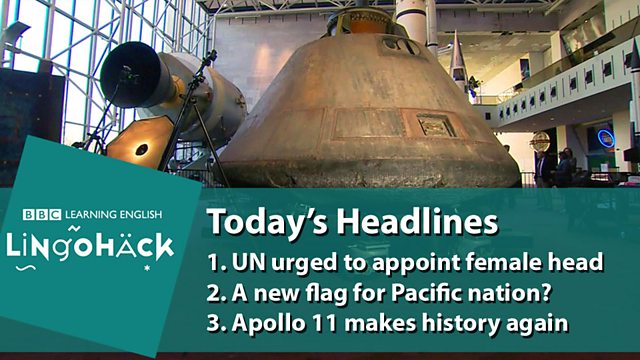 A new flag for Pacific nation?

The US ambassador to the United Nations, Samantha Power, is encouraging member states to nominate a woman as the next secretary general. It's a position which has been held by a man ever since the UN was founded 70 years ago. The current Secretary General Ban Ki-moon is due to step down at the end of next year.

In a national referendum New Zealanders have chosen a new design as a potential replacement for their country's flag. The final vote will be taking place in March. People will then be able to express their preference for the current flag, which features the British Union Jack, or the new black, blue and white design, which also has the famous silver fern.

The first manned craft to land on the moon is making history again. Scientists have been scanning the command capsule of Apollo 11 in an effort to give the public a virtual experience of what it was like inside. The project is so complicated new software had to be invented to carry it out.

nominate
to officially suggest someone for a job

something which takes the place of another

manned
(of a machine) carrying a person who operates it

1. Plans for a manned mission to Mars and back have been announced, subject to funding.

2. Anna is a good planner and her colleagues nominated her to lead the company's next project.

3. I broke your laptop, I'm afraid. Here's a replacement.