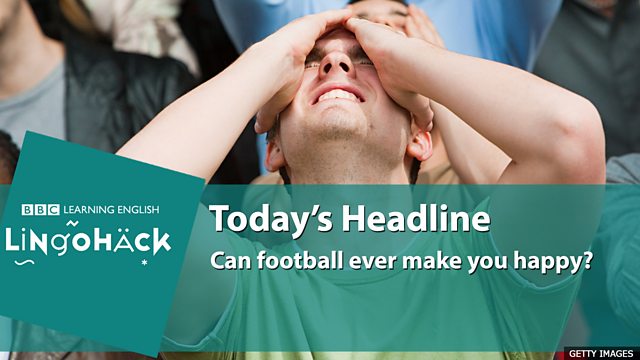 Can football ever make you happy?

rate – judge the value of something

So, does football make us happy or sad?

Professor Peter Dalton, who by the way supports Newcastle, has been studying football and happiness. Using an app called Mappiness, his team asked fans to rate how they were feeling out of a hundred before and after a game. They analysed two million responses from 32,000 people.

Professor Peter Dalton, University of Sussex
This is probably the most comprehensive dataset ever collected on happiness. You're twice as unhappy when your team loses as you are happy when your team wins. On average, it makes us sad and on the face of it, it's (a) pretty irrational thing to do - to be a football fan. It doesn't make sense, you'd be better off doing something else.

Back at the Stadium of Light, Sunderland have lost 2-1 and are relegated for the second year in a row.

Football fan
Come rain or shine, the true fans will be here next season, because if you love your team you'll come, regardless.

Football fan
You're always hopeful that your team's going to win and you go with the people that you know – you've got friends that go there. Almost like family, we are, you know, so … And that's what you enjoy. We enjoy the day.

So even if on average football makes us sad, there is always identity, family, hope.

China can claim to be the home of football. For over two thousand years, they have played the game of 'kickball'. However, it was the British who made the rules for the sport into a system and made modern association football the world's game.