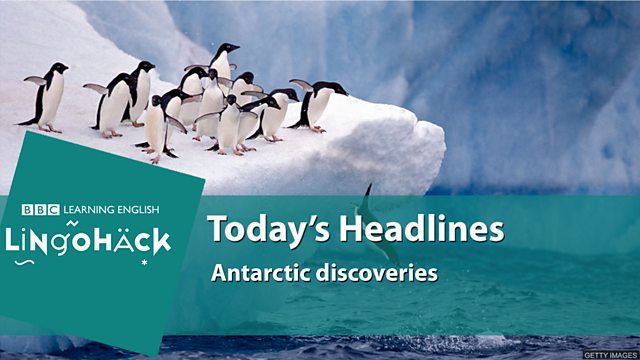 glacial ice – ice created by glaciers millions of years ago

What is threatening the species discovered in the sea off the Antarctic Peninsula?

Antarctica - the most remote continent in the world. Encased in glacial ice thousands of feet thick. It's still largely unexplored. And we know even less about the icy seas that bring it. Now machines are making it possible for us to catch a glimpse. A mini-submarine is taking marine biologist Dr Susanne Lockhart down into the Antarctic deep.

Above is a land of frigid ice, below is a thriving mass of life. No light penetrates this deep.

Plants can't grow. These are all animals. Then it was my turn to go down with pilot John.

We drop much deeper. More than a 1,000 feet (300 metres) down we find a wall of life. Sponges and corals, sea stars, feather stars - all thriving in complete darkness.

A robot arm catches samples. Some of these species have never been filmed before.

They are threatened by an increase in fishing in the region.

We gathered evidence of a unique ecosystem that deserves protection.

No one could deny that this region needs protecting. But what is the best way to do it? Is a line on a map really going to make much difference? And who is going to police anything out here? The proposal to protect all these creatures and their world will be heard by the Antarctic nations in October.

What is threatening the species discovered deep under the Antarctic?

They are threatened by an increase in fishing in the region.

Antarctica has the coldest land temperature recorded on the Earth of -89.2°C. The average annual temperature is around -50°C.