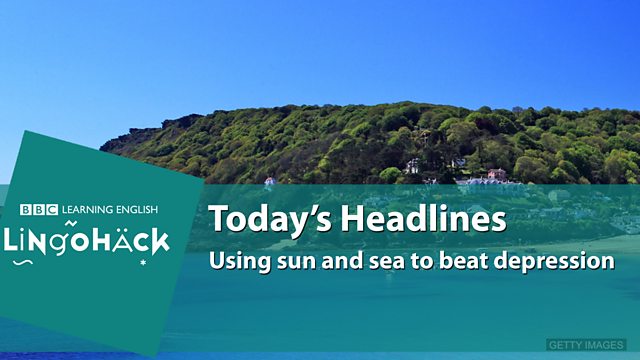 anxiety – a feeling of worry or nervousness about something

depression – feeling of unhappiness which affects your health

therapeutic quality – characteristic that causes someone to feel happier and healthier

How will this project help people who do not live near the sea?

We’re off the coast of Falmouth (Cornwall) on a boat owned by the charity Sea Sanctuary. On board a skipper, a therapist and two people, Susie and Ian, who are living with anxiety and depression.

It’s something very special about being on the water. It’s such a calming place. You can leave whatever troubles you've got behind and you can escape.

There are group sessions on board and everyone works as part of the crew, but the charity says the sea itself has a therapeutic quality. So what about people who don’t live near the coast?

A team of researchers from the University of Exeter, a 360 virtual reality camera and a drone - they’re trying to capture the power of the coast for people who can’t get there themselves.

Nikki is trying out her videos on a group of volunteers. Some of the pictures are calm and relaxing, others more interactive, stimulating.  Nikki will take her headsets in to care homes next year to bring 'blue health' to those who can’t access it themselves.

How will people who do not live near the sea benefit from this project?

They will be shown pictures and video footage of the sea.

'Blue health' is an unofficial term used by the journalist to mean using the blue colour of the sea to make people feel happier and healthier.