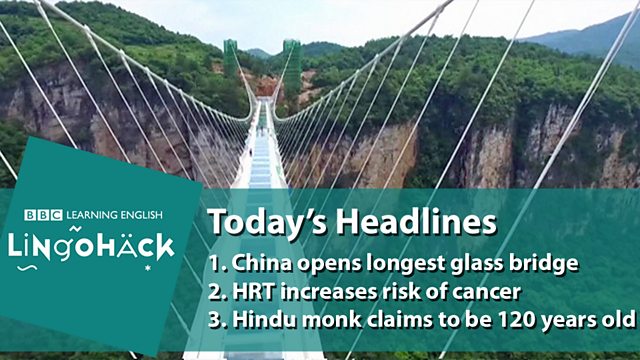 China has opened the world's longest glass-bottomed bridge, connecting two cliffs. The structure is suspended 300 metres above a canyon in Hunan province. Visitors can peer into the abyss through reinforced glass panels. The bridge is only open to pedestrians – a maximum of 8,000 people can enter a day.

New research suggests the risk of developing breast cancer for women who take combined hormone replacement therapy may have been underestimated in earlier studies. A report by the Institute of Cancer Research found women taking the drug are almost three times more likely to develop cancer than those that are not on it.

Well, I don't know about you but this gentleman looks pretty good for what he claims is his age. He's a Hindu monk from India and says he is 120 years old! According to his passport, Swami Sivananda was born on August the 8th 1896. And he put his long life down to celibacy, no spices and yoga. India's passport authorities confirmed his age from a temple register, but it hasn't been possible so far to independently verify his age.

underestimated
thought something was lower than it really was

peer / underestimated / put (something) down to

1. Hanna should have studied harder. She underestimated the difficulty of the Maths exam.

2. I had to peer into the distance to read the road sign, but I'm glad I was following the correct route to town.

3. How did I achieve my great figure? Well, I put it down to diet and exercise.