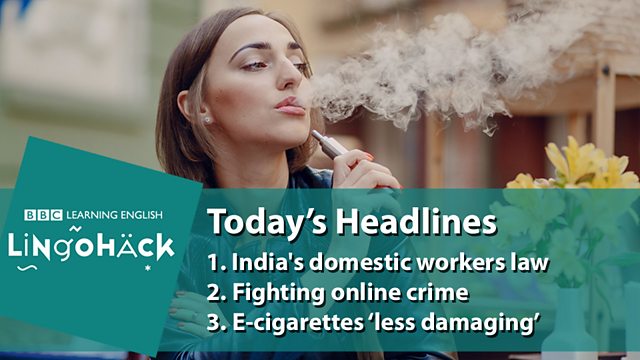 These women are part of India's vast army of domestic workers. Despite the numbers, it's a sector with few rules. But that might change – there are plans for laws giving workers a minimum wage and compulsory leave – and there would be social security cover too their employers would have to fund, at least in part.

This is not science fiction. This is our world, now in the 21st century. Here in California they're at the cutting edge of cyber security, using this virtual reality map of millions of computers to hunt hackers.

Vaping – in less than a decade, it's gone from nowhere to a habit for more than two and half million British people. Now after claims and counterclaims about the risks of e-cigarettes an official health organisation says they're good news. That's because former smokers like Elaine, have been helped to kick the habit – in her case 40 years – encouraged by a clinic she switched to e-cigs which do contain nicotine but not the damaging tobacco smoke.

Use one of the words or phrases from Lingohack to complete each of these sentences.

Note that you may have to change the form of a word to complete the sentence correctly.

3. A _______ of supporters turned up at the stadium for the big match but there weren't enough tickets so some of them couldn't get in.

1. Since Rob started vaping, his clothes smell a lot fresher.

2. I've tried to stop having sugar in my tea but I just can't seem to kick the habit.

3. A vast army of supporters turned up at the stadium for the big match but there weren't enough tickets so some of them couldn't get in.

4. The company was at the cutting edge of design and had won many awards.