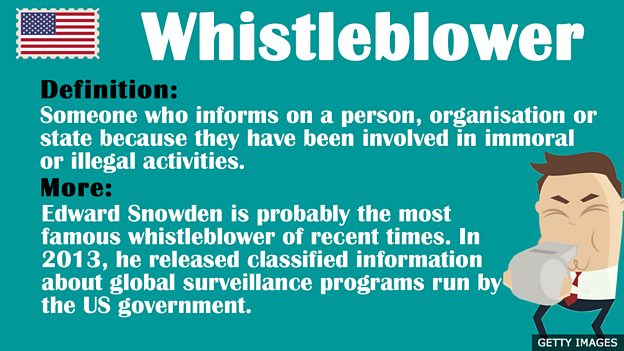 Someone who informs on a person because they have been involved in immoral or illegal activities.

Edward Snowden is probably the most famous whistleblower of recent times. In 2013, he released classified information about global surveillance programs run by the US government.

'You’re a whistleblower if you’re a worker and you report certain types of wrongdoing. This will usually be something you’ve seen at work - though not always.'

'As MPs and peers call for an overhaul of laws surrounding whistleblowing, a former private school teacher explains why she took the difficult decision to speak out.'

'When she turned up on Snowden’s doorstep in Moscow, he was braced for a slap but instead she told him she loved him and supported his decision to turn whistleblower.'