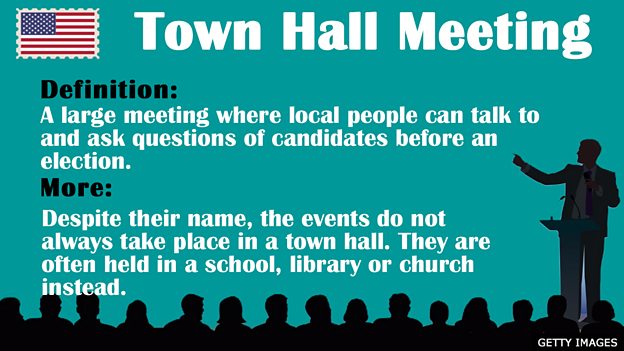 A large meeting where local people can talk to and ask questions of candidates before an election.

Despite their name, the events do not take place in a town hall. They are often held in a school, library or church instead.

'It seems many of us trust our elected officials more when they're given the opportunity to persuade us directly at town hall meetings —even if we're not in the same political party.'

'I’ve held frequent, in-person town hall meetings since I was first elected to Congress because I believe that people not only deserve to see who represents them, but also to have a public forum to voice their concerns and discuss the issues of the day.'

'President Donald Trump and Joe Biden will go head-to-head on Thursday night - but in separate town hall meetings with undecided voters instead of at a presidential debate.'