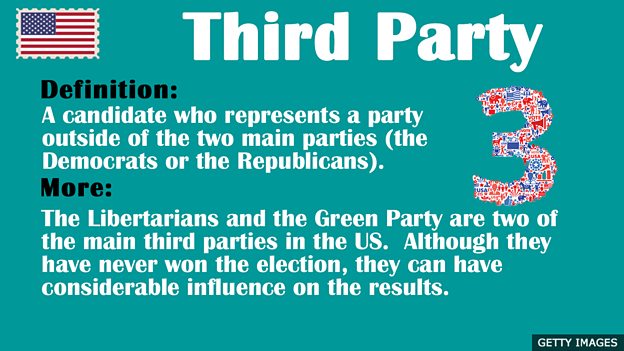 A candidate who represents a party outside of the two main parties (the Democrats or the Republicans).

The Libertarians and the Green Party are two of the main third parties in the US. Although they have never won the election, they can have considerable influence on the results.

'Most Americans, Regardless of Political Alignment, Want a Third Party'

'Barriers to third parties appearing on ballots are ingrained in our electoral laws, which have been engineered by those managing the current system so that it will endure.'

'From Donald Trump to Bernie Sanders to Gary Johnson to Jill Stein, political outsiders dominated the 2016 presidential campaign from its outset. But they weren’t just running on third party tickets.'