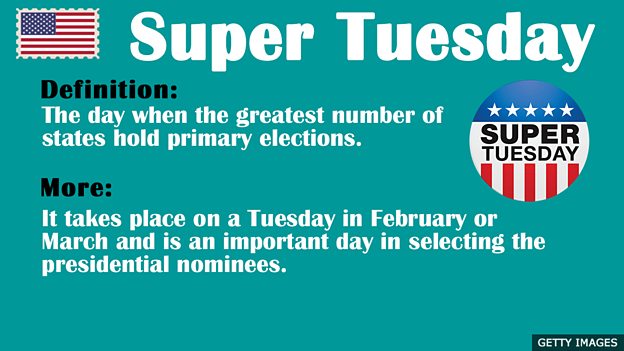 The day when the greatest number of states hold primary elections.

It takes place on a Tuesday in February or March and is an important in selecting the presidential nominees.

'Voters across America are preparing to take part in the biggest day of the 2020 election so far. More than a year after the first Democratic candidates joined the race to take on Donald Trump, we've now reached Super Tuesday. Fourteen states will vote on which Democrat they want to run in November's election.'

'Joe Biden's campaign bounced back on 'Super Tuesday' with sweeping victories in key southern states after his bid to take on Trump was largely written off following disappointing results last month.'

'Super Tuesday one of the most consequential days in the Democratic primary: the single day when the most states held primaries or caucuses, the most voters went to the polls, and the most delegates were allotted to candidates.'