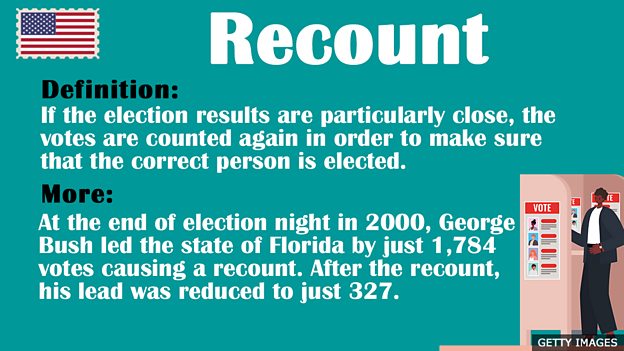 If the election result is particularly close, the votes are counted again in order in order to make sure that the correct president is elected.

At the end of election night in 2000, George Bush led the state of Florida by just 1,784 votes, causing a recount. After the recount, his lead was reduced to just 327.

'The story of the 2000 Florida recount offers a reminder of just how chaotic the electoral process can become—and of how disarray in a single state can undermine faith in the democratic process nationwide.'

'“A powerful regional body of African states has called for a recount in the contested presidential election in the Democratic Republic of the Congo.'

'Singapore’s presidential election has gone into a recount as the votes won by the top two candidates, former Deputy Prime Minister Tony Tan and medical doctor Tan Cheng Bock, were too close to call.'