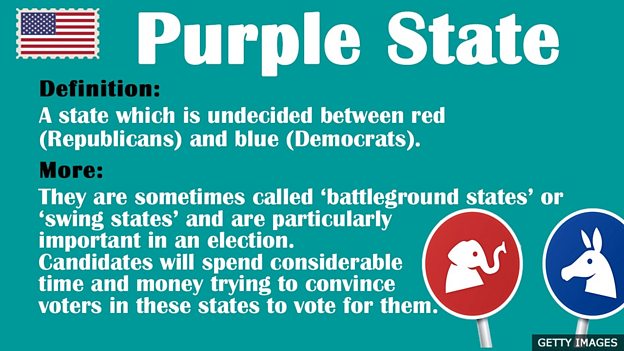 A state which is undecided between red (Republicans) and blue (Democrats).

They are sometimes called ‘battleground states’ or ‘swing states’ and are particularly important in an election. Candidates will spend considerable time and money trying to convince voters in these states to vote for them.

'North Carolina is America's newest purple state. It voted Republican in 2004, Democratic in 2008 and Republican again in 2012. Donald Trump hopes it will swing red this year because it's almost impossible for him to win the White House if he doesn't win North Carolina.'

'If we look back, looking into the ‘90s and before, we were for quite a while a red state. That’s no secret. Throughout the 1990s, we started to transition into a purple state. And certainly now we’re famously a blue state, although I always say we’re really shades of blue and in many communities red.'