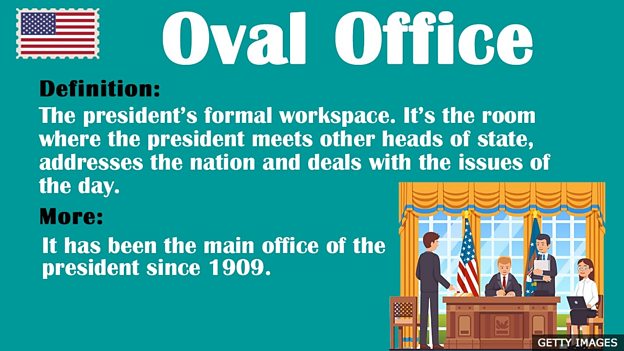 The president's formal workspace. It's the room where the president meets other heads of state, addresses the nation and deals with issues of the day.

It has been the main office of the president since 1909.

'Unsatisfied with the temporary office space erected for him in the White House residence, where he was isolating after returning from three days in the hospital, Trump had been itching to return to the Oval Office since Tuesday but aides convinced him to stay put.'

'US President Donald Trump has addressed the nation from the Oval Office at the White House, announcing sweeping new travel restrictions on Europe in a bid to combat the spread of the coronavirus.'

'Although the Oval Office was born in the expansion of the "West Wing" in 1909, the room's distinctive shape was inspired by the Blue Room and its form may be traced to a formal social greeting that was meant by President Washington as a symbolic means of dramatizing the office of the Presidency.'