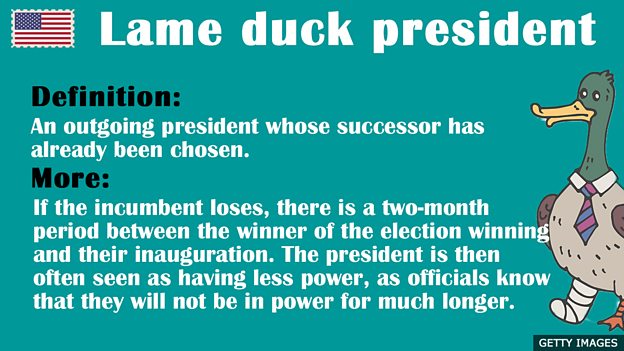 An outgoing president whose successor has already been chosen.

If the incumbent loses, there is a two-month period between the winner of the election winning and their inauguration. The president is then often seen as having less power, as officials know that they will not be in power for much longer.

'As a result, lame-duck presidents are more concerned with their legacy. They can focus on policies that are less popular, but more far-reaching. For example, President Ronald Reagan signed an arms control treaty with Soviet leader Mikhail Gorbachev.'

'Definitely not the numbers expected of a lame-duck president, especially with the coronavirus disease 2019, or Covid-19, crisis infecting nearly 330,000 people nationwide...'

'You've probably heard Mr Obama referred to as a "lame-duck President" since the election.'