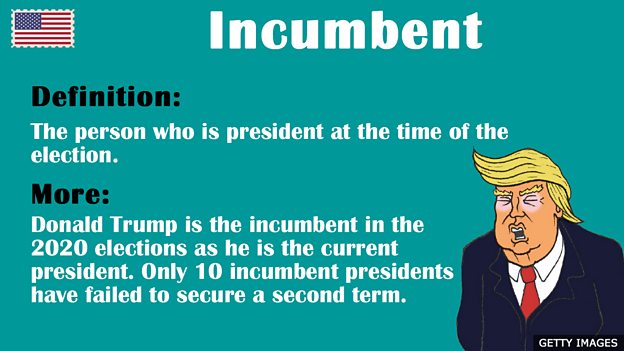 The person who is president at the time of the election.

Donald Trump is the incumbent in the 2020 elections as he is the current president. Only 10 incumbent presidents have failed to secure a second term.

'And he said that what happens with an incumbent president often is that they spend four years in office being deferred to and agreed with, and it can be tough for staff to challenge them directly. So by the time they get up there on the debate stage, they're really not used to being spoken to so forcefully and directly. And they're, by definition, out of practice.'

'While an incumbent President has never lost a primary nomination in modern U.S. history, these five challengers put up a serious fight.'

'What is not in doubt is that, in an average year, an incumbent enjoys significant advantages over a challenger in a US election, thanks to the visibility and prestige of their office.'