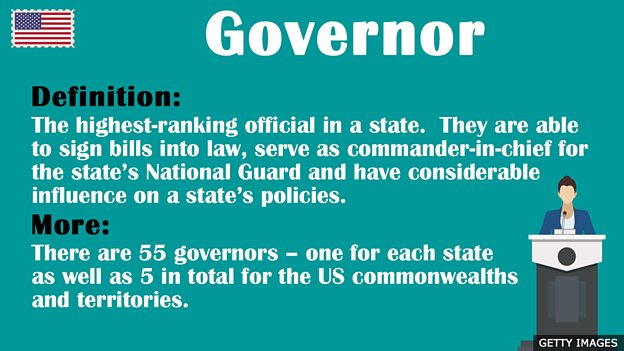 The highest-ranking official in a state. They are able to sign bills into law, serve as commander-in-chief for the state’s National Guard and has considerable influence on a state’s policies.

There are 55 governors – one for each state and 5 in total for the US commonwealths and territories.

'The approval rating of governors’ handling of the coronavirus pandemic has fallen all across the US since April, as states are still struggling to tackle the outbreak.'

'As state managers, governors are responsible for implementing state laws and overseeing the operation of the state executive branch. As state leaders, governors advance and pursue new and revised policies and programs using a variety of tools, among them executive orders, executive budgets, and legislative proposals and vetoes.'

'The governor of Texas is the chief executive of the state and is elected by the citizens every four years. The governor must be at least 30 years old and a resident of Texas for the five years immediately before the election.'

Office of the Texas Governor