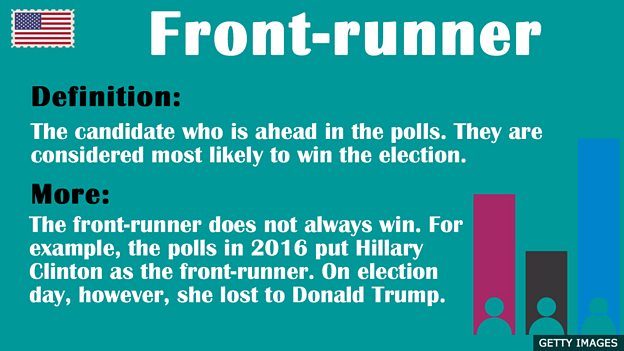 The presidential candidate who is ahead in the polls. They are the favourite to win to the election

The front-runner does not always win. For example, the polls in 2016 put Hilary Clinton as the front-runner. On election day, however, she lost to Donald Trump.

‘William Mayer, a political scientist at Northeastern University, found that in contested primary races since 1980, front-runners polling at 34 percent or higher in September the year before the election went on to win the nomination six of eight times—but not one of the five front-runners who fell short of that threshold ultimately prevailed.’

‘They’re forcing their leaders, the front-runners, into positions that will mean they lose the general election.’