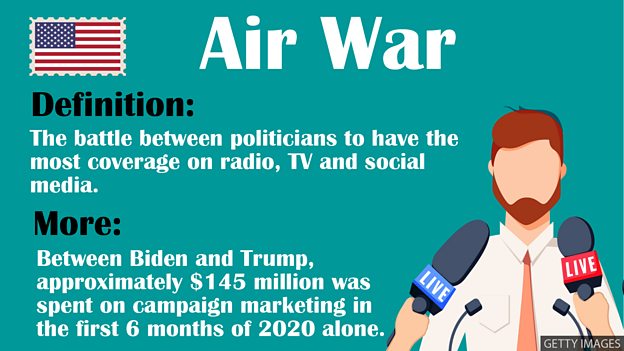 The battle between politicians to have the most coverage on radio, TV and social media.

Between Biden and Trump, approximately $145 million was spent on campaign marking in the first 6 months of 2020 alone.

'...Trump campaign manager Bill Stepien said in a statement. "In addition to advertising, President Trump's campaign has invested heavily in a muscular field operation and ground game that will turn out our voters, while the Biden campaign is waging almost exclusively an air war."'

'Election campaigns can traditionally be divided into two different approaches by parties - the "ground war" of door-knocking, leafleting and canvassing, and the "air war" of ideas and debates which are beamed out nationwide.'

‘The first significant shots of the 2016 presidential television ad air war-likely to cost $2 billion or more by November 2016-have been fired.’