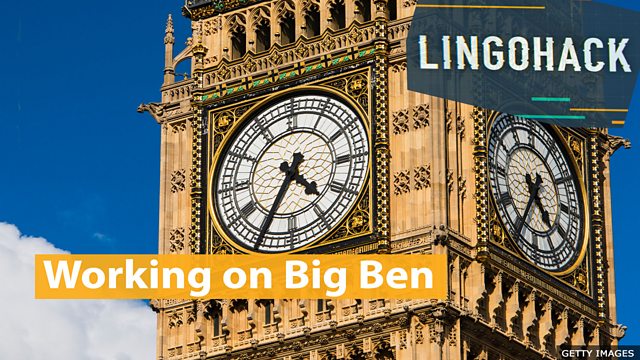 demarcations – lines which show how something is divided

belfry – part of a tower where the bells are located

hammer – object which hits the bell to make a sound

Why did a crack appear when Big Ben was struck in 1858?

Countdown to completion. One of the biggest restoration jobs ever undertaken on a landmark British building is approaching the finish line.

Ian Westworth - Clock mechanic
We are servicing the rollers. This is one of the bits that we couldn't actually get to and service while the minute hands were on.

Working on this clock would be a once in a lifetime opportunity - to actually have taken it all to pieces, putting it back together again, and then carry on looking after it for a few more years - that's just going to be fantastic.

Tim Muffett – BBC Journalist
One of the most striking things you notice is the colour of the clock faces. For many years, the minute demarcations, the numbers and the clock hands were painted black. But during the refurbishment, as many layers of paint were stripped away, it became clear that they were originally this shade of blue - it's called Prussian Blue, and that is what they have been repainted in.

With the clock mechanism out of action, a computerised system has meant that on special occasions, Big Ben has still been struck.

Mark Collins - Historian
We are standing in the belfry of the Elizabeth Tower, and it was specially constructed so that the chiming bells for the four quarters could be heard right across London.

This crack appeared when Big Ben was struck during a test in 1858. The hammer was too heavy, but it gives the bell its unique tone.

Mark Collins - Historian
It should be 'E' - the note E <music note>, but it does give it a slightly flat sound, a very serious sound, in fact. No change to the bell whatsoever because it's become the familiar, the familiar note.

A much-loved building largely hidden for the past few years, slowly revealing itself once more.

Why did a crack appear when Big Ben was struck in 1858?

The hammer, which hit the bell, was too heavy.