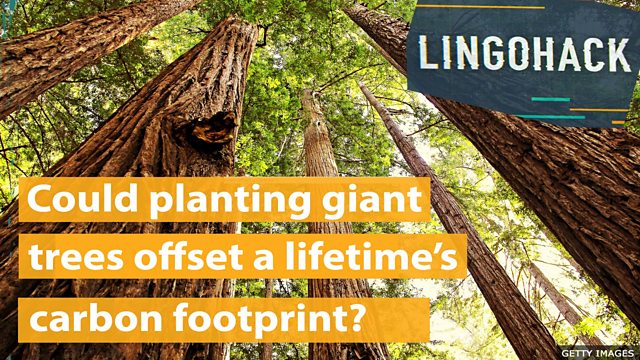 legacy – part of your history; something left behind after death

long-term – lasting far into the future

How many sequoia trees have been planted on a site in Wales?

They are huge and ancient trees. Most likely to be found in California - like these sequoias in Yosemite National Park. But if you wait, you are going to have to be patient here, you may start to see some growing further afield in parts of the UK.

Nelli Bird, BBC reporter
And this is what they look like when they start off - so tiny compared to what they'll turn into. And already, nearly five hundred of these trees have been planted here on this land, just outside Brecon [in Wales].

Henry Emson is the man behind the One Life One Tree project.

Henry Emson, Founder, One Life One Tree project
The idea came about when I was looking at my children's carbon footprint and I wanted to get a head start for them on how they could offset before they started to hit adulthood, and I came across an article that talked about giant sequoias. But this is really about a legacy and, you know, these trees over a period of, you know, a couple of hundred years, should be able to actually bring someone's carbon footprint down to zero.

And so, on this site in mid-Wales, nearly five hundred giant sequoias have been planted. Not easy to spot from high up yet - they have these green nets around them for the first few years to protect them.

Alongside each sequoia, three native trees are being planted to increase biodiversity.

Henry Emson
This is a long-term project. We're really keen that people think about, you know, the short-term things that they can do to reduce emissions - that's what the planet needs.

But behind each tree is a story.

Lindsay Perks
We’ve come over from Bristol today to plant this tree in memory of my dad and the kids’ granddad. It was very difficult for him to talk about what he wanted for his funeral, so this just feels like an appropriate thing to do. My dad liked to work in woodwork…

Nelli Bird, BBC reporter
It’s lovely that you'll be able to come back and see it, isn't it?

And if you are wondering whether the giant sequoias can thrive in the UK, take a look at this forest not far up the road in Powys in mid-Wales. The oldest sequoias here were planted in the mid-nineteenth century.

Today, sequoias are under threat in their native California - one-in-ten destroyed in devastating wildfires last summer.

Planting in the UK can help protect a species that will tower over generations to come.

How many sequoia trees have been planted on a site in Wales?

Nearly five hundred giant sequoias have been planted on the site in mid-Wales.