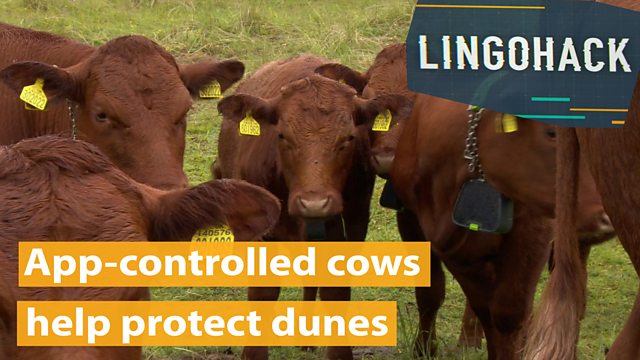 cattle – cows and bulls, bred for their milk or meat

herd – group of animals of the same type that live together

What happens to the cows if they ignore the audible warning?

The collars they are wearing allow for the remote control of where they graze.

Owen Beaumont, Natural England
On the map here, we've got [a] satellite map and we can see the pasture that we've drawn on, so that ...

And, like so many things nowadays, there’s an app to help with the job.

Owen Beaumont, Natural England
When they get to the boundary, they get this audible warning - so they kind of know to walk back into the main herd. If they do carry on through those audible warnings, they'll get a really small pulse - just a fraction of what an electric fence would be.

This nature reserve is dominated by its dunes - the flower and insect life here is unique but it's also under threat. The cattle have a key role to play in removing unwanted vegetation.

These dunes need to be grazed if they are to survive. And, of course, conservationists could just put fences everywhere to direct the cattle. But that doesn't give them the precision and control of a GPS collar.

And what about those who will have concerns about using this electric pulse on cattle?

Owen Beaumont, Natural England
Cattle have been checked out by vets, so we had a vet there when we fitted the collars, and they've been studied elsewhere as well, and found to have no impact really on the cows.

The technology is on trial here - a first for a UK nature reserve - and if successful, we’ll be seeing many more ‘remote control cattle’ playing a key role in conservation.

What happens to the cows if they ignore the audible warning?

They get a small electric pulse from their collar.