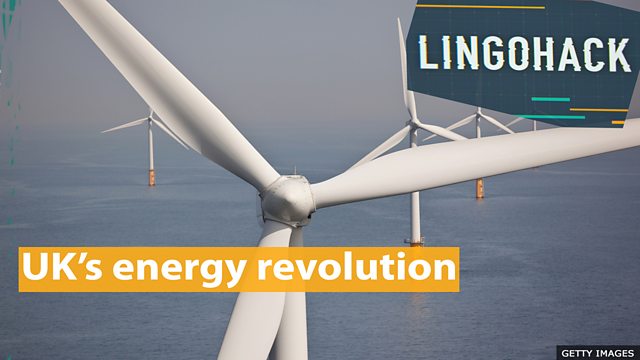 power (verb) – provide energy for something to work

How many times does a blade have to turn to power a house for a day?

That’s where these latest huge wind turbines are being installed.

Justin Rowlatt, BBC reporter
So to give you an idea of how big this thing is, I'm going to walk it.

Each of these blades is made by hand from balsa wood and fibreglass.

So there we go, eighty-one metres.

You need a giant factory to make a giant wind turbine, which has created a new industry here in East Yorkshire (North of England).

From the factory, the blades, towers and the generator are loaded onto a boat – yep, a really big one - and sailed out into the North Sea.

This is where the vast new wind farms that increasingly power Britain are being built.

Patrick Harnett, Programme Director, Orsted
This is our 1000th wind turbine in the UK for Orsted. About ten years ago we were about 40% reliant on coal, we are now only 2%.

The Danish company has installed about half this country's offshore wind capacity. And the plan is to keep on building.

A huge crane lifts the one hundred and twenty-five-metre tower. Next, comes the generator. Then you need to attach those eighty-one-metre turbine blades. Now, you can start generating electricity.

Each turn of the blades is enough to power the average home for a day. And the offshore wind industry is on track to power every home in the UK by the end of this decade.

How many times does a blade have to turn to power a house for a day?

Just one turn of the blade in a wind turbine can power a UK home for a day.