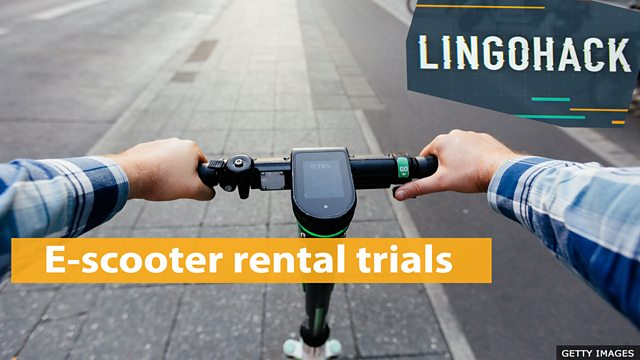 joyriders– people who ride transport dangerously and quickly for pleasure

congestion – too much traffic meaning movement is difficult

legalised – to be made legal

How many towns in the UK are already part of the government's e-scooter rental trials?

Joyriders on rental e-scooters put themselves in danger - but they also put others at risk. They're a threat to pedestrians and to other road users - and the scooters themselves get in the way. Elaine Maries knows the risks. She's partially sighted and relies on Inca (her guide dog) to help guide her around town.

Elaine Maries - Pedestrian
I heard some screaming, and then the next thing I knew, I'd actually been hit by somebody that had come round the corner, gone straight into me - I then lost my balance, ended up falling on Inca, bruised my elbow and my knee - which then meant, you know, you just don’t go out.

The Department for Transport told the BBC the incident is a matter for the police. 31 towns are already part of the government's e-scooter rental trials, with six London boroughs getting e-scooter rental schemes today.

The aim is to learn more about the risks and benefits of e-scooters, says the Department for Transport. It believes they can help reduce congestion and pollution, but wants to make them safer and to find ways to reduce bad behaviour.

Justin Rowlatt – BBC Reporter
So the government believes these things can encourage us all to leave our cars at home. The idea is they kind of extend the transport network, by giving us another way to get around. And the operators of the London scheme say many of the issues people have with e-scooters can be addressed.

Alan Clarke - Director of Policy, Lime
We're using designated parking areas, so when you finish your ride, you go to lock the scooter on your app, you go to press ‘end ride’ - if you're outside of a parking zone, what we’ll do is actually show you within our app where the nearest appropriate parking location is and how you can get there.

Some environmental campaigners are saying now private e-scooters should be legalised too.

Hirra Khan Adeogun - Climate charity, Possible
The research shows that private e-scooters are what really get people out of their cars. Because they own them, they're not leaving them around.

So, if you hate e-scooters, be warned – the chances are you will be seeing more of them in our towns and cities in the years to come.

How many towns in the UK are already part of the government's e-scooter rental trials?

31 towns are already part of the government's e-scooter rental trials.