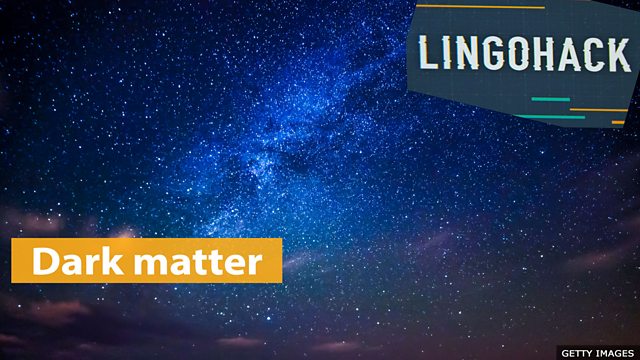 unveiling – revealing or presenting something for the first time

How can dark matter be detected?

Look up at the skies and you see stars. But this telescope in the deserts of Chile is able to see the Universe as it really is, filled with a mysterious substance called dark matter. It can’t be seen - but this instrument can detect dark matter by the way it distorts starlight.

Professor Ofer Lahav - University College London
This is a map of matter in the Universe.

And that's allowed astronomers to produce this map of how it's spread across the expanse of space.

Professor Ofer Lahav - University College London
It's an element of, you know, unveiling mystery - something you couldn't see before and suddenly it's there. And you think - wow!

Pallab Ghosh – BBC Reporter
So what is dark matter - and where is it in space? Well let's start off with our own sun. It's one of a hundred billion stars that make up our galaxy - the Milky Way. Which, in turn, is one of countless others throughout the Universe. Dark matter permeates space, with galaxies like tiny gems on a tangled cosmic web.

The bright areas are where dark matter is most concentrated, and it's here that galaxies form. But the map is not what astronomers expected - the matter should be slightly more clumped together. Instead, it’s smoother than predicted by Einstein's theory of general relativity, which helps determine how the matter should have spread out after the Big Bang.

Dr Niall Jeffrey - Ecole Normale Superieure
If the structures in this map are smoother than we expect them to be, which is what the results seem to hint at, it means that Einstein's theory is wrong. So you might think that is a bad thing, that maybe ‘oh no physics is broken’, but for a physicist it’s extremely exciting, because it means that we can find out something new about the way the Universe really is.

Building on the work of Einstein, Carlos Frank was among a group of scientists that developed the current model of cosmology.

Professor Carlos Frenk - Durham University
Hearing now that there may be something not quite right with the theory is very disconcerting. It’ s very alarming - and in a way frightening to see that maybe my whole life's work might crumble in front of me. But at the same time, it is immensely exciting.

Astronomers believe that we are at the start of a new revolution in cosmology that will give us a fuller understanding of how the Universe began - and how it will evolve.

How can dark matter be detected?

Dark matter can be detected by the way it distorts starlight.