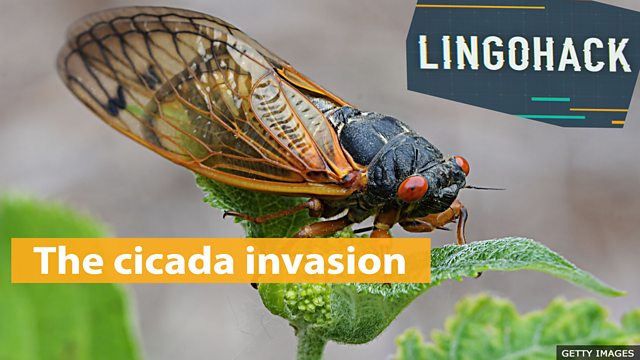 burrow – [animal] make small hole in the ground, usually to live in

How long will the female cicada live after emerging from the ground?

It's a sight and sound that will make your skin crawl. Billions of periodical cicadas emerging out of the Earth and overtaking the eastern United States. The rare spectacle has Americans in awe.

Rosemarie Grant – witness
And it was deafening, really deafening.

The Grants have lived here for decades, and like clockwork, the Brood X cicadas have arrived at the same time every seventeen years to mate. It can get so loud that some of their friends have mistaken the male insects' droning song for a police siren.

Peter Grant – witness
Because of my hearing disadvantages, I don't put my hearing aids [in] when I come out in the garden, otherwise I get the whole sound magnified.

The mass emergence and its timing is all part of a clever survival strategy to evade predators. Then the metamorphosis from nymph to adult happens relatively quickly.

Nada Tawfik – BBC Journalist
So here we have a fully grown female that’s now ready to mate and lay her eggs. She'll only live four to six weeks, though, after being underground for 17 years.

Because this is when they are most vulnerable - right here, because their body is so soft

It’s a magical time for entomologist Dr Jessica Weir whose 16-year-old daughter wasn't even alive the last time she saw these insects. The world was a very different place back then. George Bush was president, and Facebook was just launched.

Dr. Jessica Weir - Entomologist, American Natural History Museum
You know, a lot of people for centuries have been calling these things locusts, but there are the opposite of locusts, because they're not actually a plague -they’re not destroying crops. They're actually living their life completely in exclusion of humans and they are great nutrition.
Yes, you heard that right. These critters are a culinary delicacy.

Joseph Yoon - Chef, Brooklyn Bugs
The cicadas are a flavour bomb. They have so much flavour and add a sense of umami to the dish
Chef Joseph has been cooking with the star ingredient to encourage Americans to re-imagine bugs as a protein-rich sustainable food source.

“OK, I am going to go with this one here. Bug appetite! A burst of springtime in your mouth.”

For others, the noisy critters are just downright disruptive. It's safe to say Shakespeare is not in love with the cicada. This theatre company has had to cut its outdoor season short.

Bonnie Monte - The Shakespeare Theatre of New Jersey
The last time I directed a show out here I sat over there with two huge badminton rackets and just screamed as they came at me and swatted them away.

The takeover may be dramatic, but it is temporary. Soon the larvae of the new generation will burrow their way into the ground resetting the 17-year cycle.

How long will the female cicada live after emerging from the ground?

The female cicada will live for only four to six weeks after emerging.