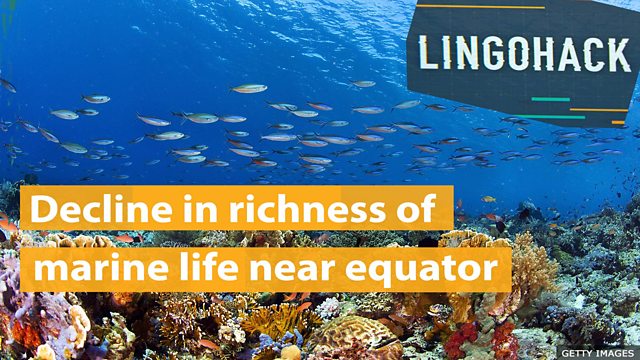 hotspots – places where there is a lot of activity

a wink of an eye – very quickly

systemic – widespread; involving all parts (of something)

The tropics, off the coast of Cuba. For thousands of years, these waters have been one of the hotspots of life in the ocean. But in seas like this – near the Earth’s equator - the richness of marine life is shrinking due to climate change.

A new global study - the largest of its kind - has found that since 1955, open- water species declined by about half in tropical oceans. Sea surface temperatures rose by nearly 0.2 degrees Celsius. It's happening faster than expected.

Sebastian Ferse, coral reef researcher and ecologist
So in geological history, this is a [blip], so it's just a wink of an eye. And to see such rapid changes, or such changes… occurring so rapidly, is something that's astonishing, I would say.

It's the latest research that shows the large systemic changes global warming has had on the biodiversity of the ocean.

And it suggests that the tropics are becoming too warm for many species to survive. Those species that can move are moving to cooler waters.

But for fixed species like corals, moving is not an option. And staying put in warmer temperatures can lead to higher rates of coral bleaching.

These shifts could devastate the ecosystems left behind, and any fishing and tourism industries that rely on them. It's another stark warning from scientists that unless we act soon to address the urgency of climate change, it will be too late.