How will Brexit affect the flower industry? 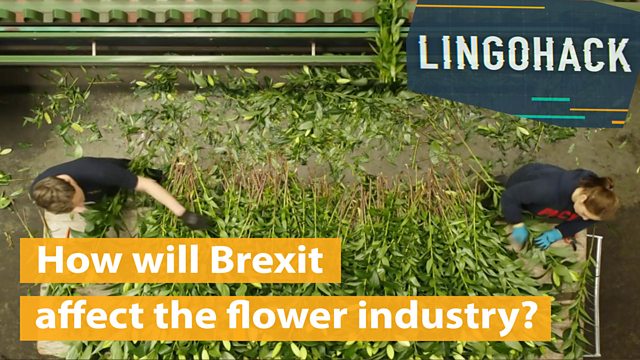 How will Brexit affect the flower industry?

auction – event in which people buy through bidding

supply and demand – relationship between price of a product and need

What factors have driven up the cost of flowers?

The skill of arranging flowers comes easily to Morgan but arranging his company's finances is proving a nightmare.

Covid, supply problems from Holland and Brexit have driven up costs.

Morgan Douglas Nuth - Florist
Prices to wholesale have increased. Therefore, we're buying at a higher price - some we can absorb, some we can't. So, increase to consumer has definitely risen over the past three months.

If you’re sending lilies this weekend, there's a good chance they began their journey in this corner of the Netherlands.

Extra post-Brexit checks on these sorts of flowers have just been pushed back eight months by the British government. But when they do kick in, this grower will have to pay more than a hundred euros every day for an inspector to come and issue a so-called phytosanitary certificate to allow him to export to the UK.

Jaap Moerman - Flower grower
After two years of worrying about Brexit, we thought, the first week it was a bit of a panic and we thought, you know: ‘Where's this going with all this paperwork and with all the costs?’ Then we thought ah, it was just sort of a ‘millennium bug’ thing - in the end, it’s all not too bad. But now, with the whole phytosanitary things, we still think ‘yes’, it’s going to be an increase in costs again.

It looks like they're shifting stocks and shares, but actually it's all about seeds and stems. The buyers at this very early morning auction now factor in an eight per cent tax on flowers grown outside the EU, like roses from Kenya that are sorted and sent on to the UK.

But experts say it’s not a simple case of Brexit driving up prices.

Caroline Marshall-Foster - Editor, The Florist magazine
I suspect everybody's going to be reviewing their prices, simply because, for example, this week alone, the flower prices on the Dutch auction went up forty-one per cent. That's nothing to do with Brexit or anything - that's just supply and demand and no business, whether they are gigantic or tiny, can absorb a forty-one per cent increase.

It's been a chaotic year for the flower world, but this Dutch distribution centre still runs like clockwork. A conveyor belt of celebration, but also of condolence.

The ultimate symbol of how we’re feeling at so many moments in the circle of life.

What factors have driven up the cost of flowers?

Covid, supply problems from Holland and Brexit have driven up costs.