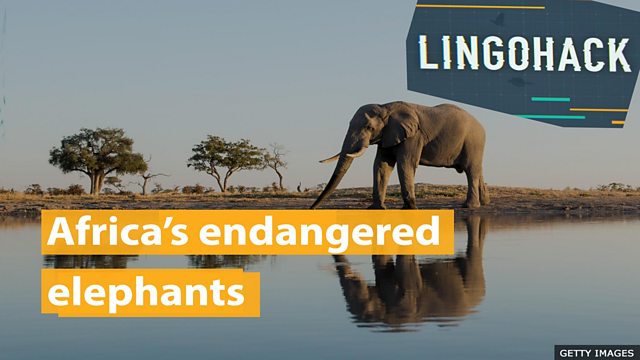 destruction – damage to something so it can’t be used again

wake-up call – warning that causes someone to do something

The largest land animals on Earth. But their size has not protected them from the impacts of poaching or from the continued destruction of the vast swathes of interconnected habitat they need.

This latest Red List of Threatened Species - considered to be the comprehensive report on how nature is faring on an increasingly crowded planet - puts Africa's savanna elephants into the endangered category.

Forest elephants are now even closer to extinction - critically endangered.

Across Africa, there are now just over 400,000 wild elephants. And this latest examination of decades of census data and habitat surveys has shown that the demand for ivory still drives the decline in their numbers.

The level of threat they faced had also been masked by the fact that the African elephant was previously thought to be a single species. This is the first time the savanna and forest elephant have been assessed separately.

Victoria Gill, BBC reporter
What does it mean practically to have this information about their status? How do you use that to protect these animals and reverse these declines?

The loss of species and natural spaces is happening all around the world. But conservationists are confident that this wake-up call could ensure that these giant icons of African wildlife get the protection and the space that they need.