The dentist helping a koala to walk 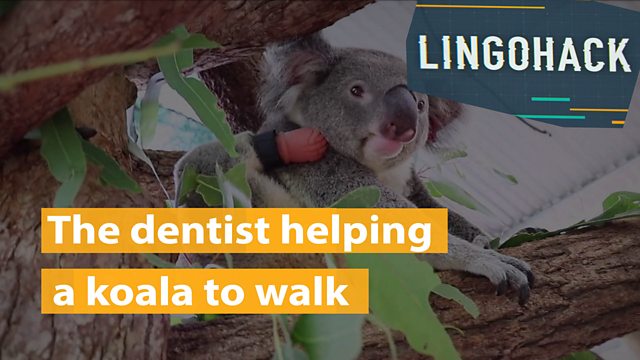 The dentist helping a koala to walk

rejuvenated – made to feel younger and more energetic again

quality of life – standard of health and happiness

What did the dentist make to help the koala walk?

It’s an unlikely story - but an Australian dentist has made the world’s first prosthetic foot for a koala.

Jon Doulman, Dental Prosthetist
My name's Jon Doulman - and I’m a prosthetist, I make dentures - so it was just a matter of bending the rules a bit I suppose.

This is Triumph - Jon’s first animal patient. He’s a rescue koala who was born without a foot.

Marley Christian, Vet Nurse
Because he didn't have a foot, he limped and he wouldn't put pressure on it. He had difficulty in climbing. He could not jump, and of course, he walked a lot slower.

Marley wanted to help Triumph with his mobility. But when initial attempts to make a prosthetic failed, she ended up going down a less conventional route.

Marley Christian, Vet Nurse
I was speaking to our local dentist, Jon, and he wanted to have a look. I thought hmm, OK!

Jon Doulman, Dental Prosthetist
I realised that he was in trouble. Just watching him walk around, holding his leg in the air. The fact that his leg bone almost protrudes through the bottom, so he’s standing on it, and I thought there’s nothing to lose - I should have a go at [helping] him.

So, Jon made a model of Triumph’s leg and got to work looking for a solution.

Jon Doulman, Dental Prosthetist
I came up with the idea of making a boot out of this dental material. And luckily, he has, almost has, a little ankle here - which means that this thing can slip over it and we can Velcro at the top, which is what’s holding it on. And then it was just a matter of giving him some tread pattern so he could grip.

Marley Christian, Vet Nurse
So since I put it on him, he actually did this little jump - started running around, so… yeah, he reacted really, really well. He seems like, I don’t know, he was reborn again, he was just rejuvenated. I have to say that I cried because it was just such a great moment.

Marley Christian, Vet Nurse
Amazing! Amazing that it could be done. And it just gives him a better quality of life - because he’s going to be in captivity for the rest of his life.

What did the dentist make to help the koala walk?

He made the koala a boot.