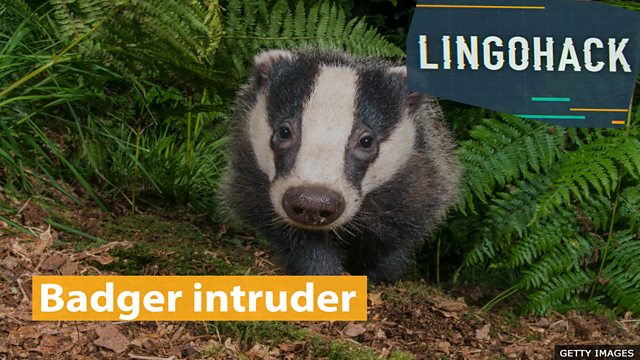 unfazed – not worried or alarmed by the situation

lured – attracted or persuaded by something

imprinted – trained; shown how to do something

It began as a mystery - who was the nighttime intruder breaking into the Henderson family home? Fortunately, CCTV caught him in the act and they soon got the answer - nose to nose.

Zoe Henderson
I was asleep in bed and heard some noises in the kitchen and sort of stirred. And, as I sort of turned to the side, I felt something sort of on the side of the bed, thinking it was one of the cats trying to get up, and turned around to see a big squishy black nose that was a badger with his two clawed feet on the side of my bed. So, I was a little bit surprised at sort of five o'clock in the morning. I couldn't believe it. I was amazed.

Seemingly unfazed - and lured by the smell of cat food - the badger came back. And ever since, he’s made himself quite at home.

Zoe Henderson
He's got bags of personality and he's not fussed by anyone or anything. Yeah, he’s hilarious. I love him. I’d keep him as a pet, but I don't think my husband would be very happy about that!

Now nicknamed Bertie, he’s visited more than half a dozen times in the last fortnight. For the Hendersons, a welcome distraction during lockdown.

Nigel Tolley, Badger Trust
It's not a rare occasion. I mean, we do get quite a few instances like this. They’ll normally only come up to you when they've been imprinted from quite an early age. But this one has obviously - over a period – has got used to the situation and got used to coming in through there, and knows it'll get some food if it does come in through the cat flap.

Bertie is becoming something of a social media star. But he better watch out - the cat food is starting to slow down his quick getaway.