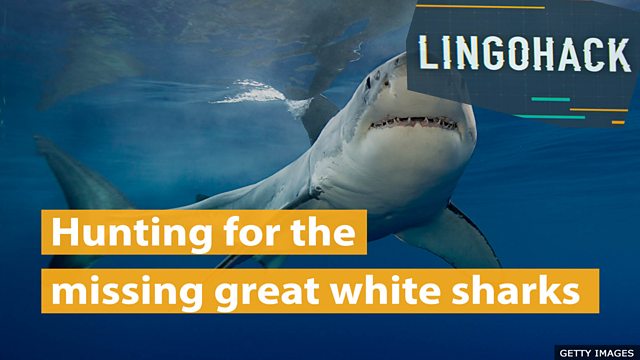 mysteriously – in a way that can’t be explained

suspects – people thought to have committed a crime

detectives – people whose job it is to solve crimes

crime scene – location where a crime is thought to have occurred

prime suspects – people thought to have most likely committed a crime

On a hillside overlooking False Bay [South Africa] – shark spotters are keeping a close watch on the waves.

After all, this coastline near Cape Town has long been home to hundreds if not thousands of the world’s most famous predator. Until now.

Monwabisi Sikweyiya, Shark Spotters
Wherever you go, if you put your feet into the water, you expect to encounter white shark, but that’s not the case no more. I don’t even remember the last time I saw the shark.

It’s two years now since they vanished, and the economic impact has been devastating. The great white tourism industry has collapsed.

But why did they disappear? This amateur footage shows the arrival of two suspects, a pair of orcas – killer whales - could they have scared off all those great whites?

Sarah Warries, CEO, Shark Spotters
To us, the arrival of these orcas and then the reduction in shark activity does all seem to be correlated. It appears that the orcas arrived and the sharks just are aware that they are no longer the apex predator anymore.

But here is another theory. Local fishermen have been catching smaller sharks to export to fish and chip shops in Australia. Those sharks formed part of the great whites’ diet.

Her view is that the great white population has been shrinking unnoticed for many years because of climate change, pollution, overfishing - a range of human activities.

Dr Sara Andreotti, University of Stellenbosch
It is not just frustrating, it’s the feeling that that happened under our watch, you know, we saw the sharks, we saw the numbers were not great, and the work we did wasn’t enough to get the environment better protected in a way, or maybe it was just too late.

Her conclusion is that the great whites didn’t move elsewhere, they simply died out - their turf taken over by these copper sharks.

Nothing in this great white mystery is certain, except for the knowledge that we humans are, as usual, prime suspects.

Which industry has the disappearance of the great white sharks badly affected?

The great white tourism industry has been badly affected – it has collapsed.