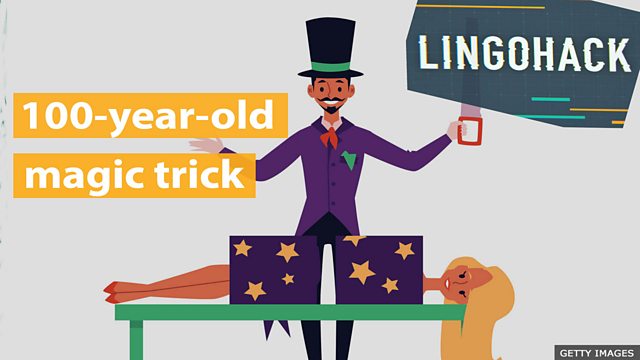 moment – specific time when something unusual or special happens

illusion – something that appears to be real that is not

Who invented this 100-year-old magic trick?

Michael J. Fitch, whois just one of many magicians taking part in a global, online celebration of a magical moment.

Michael J. Fitch, Magician
Whenever anyone says, you know, you're a magician, the first line - we hear it every day – is “oh, can you saw my wife in half?” oryeah, “Can you saw my husband in half?” And it’s, it’s… for some reason that illusion has stuck in everybody's mind and captured their imagination.

And this is the man who created the illusion: P.T. Selbit. His real name was Percy Tibbles, but not everyone was impressed with his new trick.

And while this anniversary is a celebration of P.T. Selbit’s creation, it’s worth noting this is very much a two-person trick.

David Sillito, BBC correspondent
Would I be right in saying that a lot of the work’s going on inside the box?

Helen Fitch, Magician
Of course, yeah. All the hard work goes on inside the box. Michael just has to stand there and put some blades in or knives in - he gets the easy part. Yeah, definitely!

Michael J. Fitch, Magician
That’s not true. It's magic. It's magic and it's all me - it’s magic.

David Sillito, BBC correspondent
So, is this another example of men doing all the talking, claiming all the glory, while the women do the work?

It is, then, a magical landmark. But a hundred years on it is also perhaps a good time to think about exactly who is doing the magic.

Who invented this 100-year-old magic trick?

P.T. Selbit is the name of the magician who created the trick.