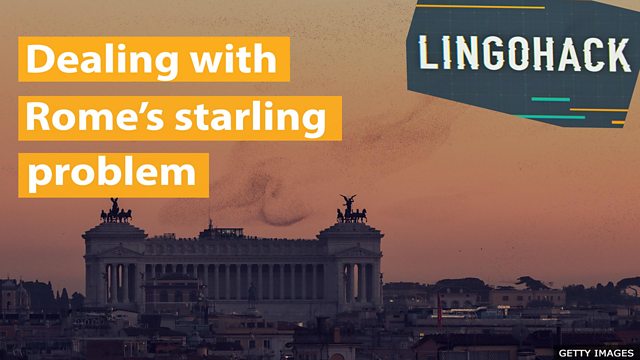 predators – animals that hunt and kill other animals

murmuration – large group of starlings flying and changing direction together

augur – sign of what may happen in the future

What are Rome city officials using to try to encourage the birds to leave?

In the Roman twilight, nature’s great dancers flock to the stage.

A synchronized spectacle of breathtaking beauty.

The starlings migrate in winter, south to Africa, nesting at night in central Rome for warmth, flying in formation to avoid predators.

A murmuration it’s called, and this city of art marvels at the show.

But beneath their charm, Rome is rotting, and it's a hell of a mess.

Mark Lowen, BBC correspondent
In the cold light of day, the other side of these gorgeous birds is clear. And for those unlucky enough to be in the wrong place at the wrong time, it is not exactly sightly, it can be a safety hazard, and I can tell you that even with a mask, the stench is rancid.

“I slipped on the droppings when it was muddy,” this man says, “the world has invented everything, just not bird underpants!”

Beside the ancient forum, a new attempt to try to solve the problem.

City officials shining lasers onto trees, which the birds dislike, prompting them to move on.

The project is focused on Rome’s tourist heart, in a bid to clean up its image.

Marco Leva, Environmental Officer
This doesn’t cause the birds any stress - it's more like a nuisance for them. I do this work, but I’m actually a nature lover. We’re not stopping them from sleeping, we’re just telling them to find another location, and it works - these trees used to be completely full, and now they are about ten percent of what there were.

In ancient Rome the starlings were seen to augur the gods’ wishes. Centuries on, these dazzling creatures keep visiting. How man and nature can coexist is the eternal problem of the Eternal City.

What are Rome city officials using to try to encourage the birds to leave?

City officials are shining lasers onto trees, which the birds dislike, prompting them to move on.