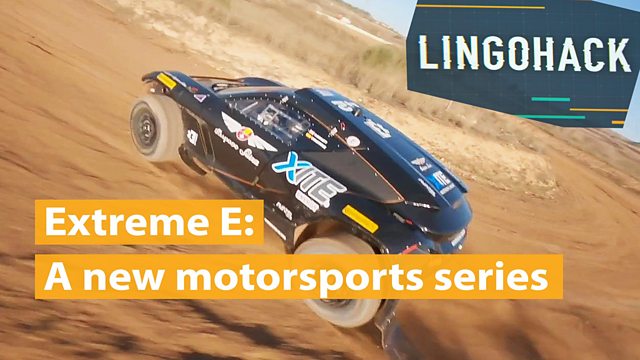 horsepower – unit for measuring the power of an engine

acceleration – increase in the speed (of something)

fuel cell – device that creates electricity from a chemical reaction

capable – having the ability to do something

The cars are electric SUVs designed by the Formula 1 design guru Adrian Newey. They deliver 400 kilowatts - the equivalent of 550 brake horsepower. And they will be racing in some of the most extreme environments on Earth.

Sir Lewis Hamilton, Formula 1 driver
[What] brought my attention to Extreme E is the great places that it is going to go to and raising awareness for the real climate issues. We’ve got some serious challenges up ahead of us. The direction we are going as a human race is not good, and yes there are potential changes – you know, the government saying that only electric cars - but that fixes… perhaps whilst that fixes one problem, another problem pops up. You know, I’m trying to learn as much as I can with EV technology, which I think Extreme E will help develop, but that I don’t think is the answer to the whole issue that we have.

The idea is to show just how powerful and fun electric vehicles can be, and to raise environmental awareness by racing them in places that have already been affected by climate issues.

The series will be going to Greenland, the Amazon, and the deserts of Saudi Arabia. Extreme E is also billing itself as the world’s first gender-equal motorsport platform: there’ll be four teams, each with two drivers: one male, one female.

Cristina Gutiérrez, Extreme E driver
The acceleration is totally different; [There] here [is] more power than the petrol cars. Of course the sound is totally different. [There] Here is no sound. I think I prefer the electric car because I need to make a change, especially in these days because the climate change is near.

All Extreme E freight and logistics will travel by sea in a refurbished Royal Mail ship – the RMS Saint Helena. And the series will generate some of the power it uses with portable solar panels. They’ll be used to create hydrogen, which, on race day, will be fed into a fuel cell like this to generate electricity, helping prove a low-carbon technology that will find applications around the world, say its designers.

So here is the question, does this series deliver on its climate-aware promise?

Justin Rowlatt, BBC Environment Correspondent
Well, there’s no doubt that Extreme E will create unnecessary emissions, but it will also showcase just how capable electric vehicles can be, and it’ll send another important message - that the low-carbon revolution doesn’t have to be dull and boring.

The Extreme E series will begin in Saudi Arabia in March.

The series will be going to Greenland, the Amazon, and the deserts of Saudi Arabia.