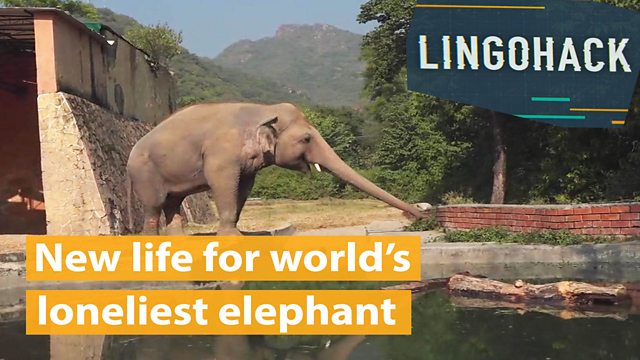 vocal supporter – person who enthusiastically backs a cause

This is the story of one of the world’s most famous popstars and the world’s loneliest elephant.

After 35 years in captivity, at times left chained up, Kaavan is being set free.

Tens of thousands of people signed a petition on his behalf. His most vocal supporter, superstar Cher.

Kaavan was given to Pakistan as a gift by the Sri Lankan government back in 1985. But he’s been badly treated at this zoo, enduring poor conditions. Life got even worse after his only companion died eight years ago.

Secunder Kermani, BBC reporter
The way Kaavan is swaying his head from side to side is a common sign of distress, and it’s something that he spends a lot of time doing. It’s why campaigners have been so keen to move him.

Now Kaavan will be taken to a wildlife sanctuary in Cambodia, after a court shut the zoo down until its facilities are improved. A specialist international charity has been preparing him for the journey – trying to get him used to the crate he will fly in, using food to encourage him to obey their commands.

Kaavan weighs around five tonnes - moving him will be a huge logistical challenge. But the charity’s leading vet has discovered how to help keep him calm – singing to him! His favourite song, Frank Sinatra’s ‘I Did it My Way’.