Ban on new petrol and diesel cars in UK from 2030 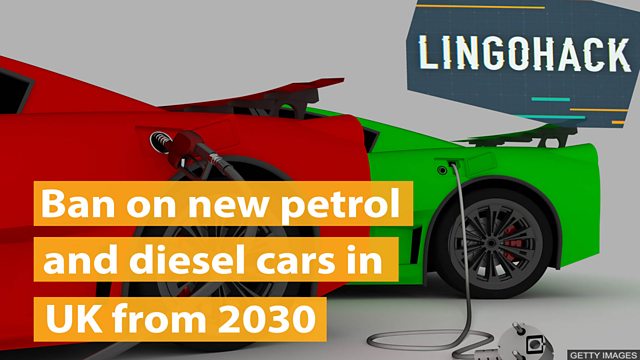 Ban on new petrol and diesel cars in UK from 2030

performance – how well someone or something does its job

top end – most expensive or most advanced

range – (here) distance something is able to travel without refuelling

museum pieces – things that are old and no longer used

Who thinks the 2030 target is too ambitious?

Cars have changed surprisingly little over the years. Yes, the design and the performance have improved, but what happens under the bonnet hasn't.

“I can't believe it - racing at Brooklands!”

And we know that produces carbon dioxide and other pollutants.

“It really does accelerate fast.”

Which is why the government isn't saying ‘get rid of cars’ - just the engines.

This is the race version of Jaguar's latest electric offering, proving the performance of electric vehicles, even at the top end, is at least the equal of petrol.

Most of the big car companies now have at least one electric vehicle in their range, but they say the 2030 target is very ambitious.

Mike Hawes, Society of Motor Manufacturers and Traders
We’ve been an industry built on petrol, diesel engines for over a century. Shifting that, with all the embedded investment, to a brand-new technology in the space of what is a few years, is an incredible challenge.

There are lots of questions. Will electric vehicles be affordable? Will they have the range we need, and where will we charge them?

Baroness Brown, climate Change Committee
We really do need more charge points on city streets and in towns to cater for the people who don't have off-street parking opportunities. They need to be around where people can see them, to give them confidence they are going to be able to charge their vehicles, and they also need to work.

Back at the museum, they're putting the cars away for the night. It now looks like from 2030 our petrol and diesel cars will be on their way to being museum pieces too.

Who thinks the 2030 target is too ambitious?

The big car companies think the 2030 target is very ambitious (needing a lot of effort and skill to achieve).