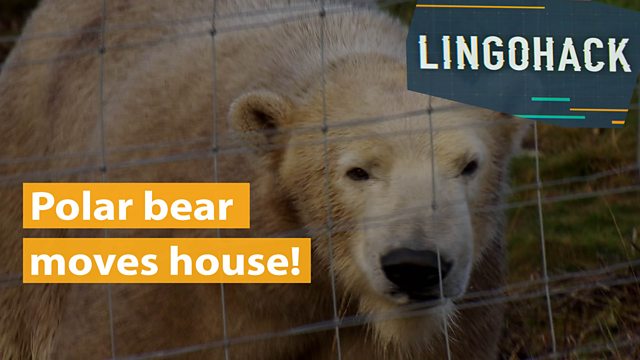 captured hearts – caused people to love it very much

bring into the world – have children

fingers crossed – with hope that something is successful

settling into – becoming familiar with (somewhere)

Hamish has lived his life in the spotlight. He first captured hearts in 2017 when he became the first polar bear cub to be born in the UK in 25 years.

His name was chosen through a public vote.

Now, not so little, at two-and-a-half years old, he's finally moved from the Scottish Highlands to his new home in Doncaster [in England] after years of practising for the trip - a seven-hour journey by road.

Keith Gilchrist, Animal Collection Manager, Highland Wildlife Park
He has been trained to enter his travel crate for the past year - probably more - which is a very slow process - tiny little baby steps.

The Royal Zoological Society of Scotland had always planned to move Hamish to another zoo, once he was between two and three years old. That's the age a cub typically leaves its mother in the wild.

Conservationists estimate there are less than 35,000 polar bears left worldwide. Keepers at the Highland Wildlife Park are hopeful that his departure will give parents Victoria and Arktos the space they need to bring more cubs into the world.

Keith Gilchrist, Animal Collection Manager, Highland Wildlife Park
Later this year, or early next year, we do hope to pair Victoria with Arktos again, and we'll keep our fingers crossed for Hamish 2!

His name is Hamish.