Plans to land first woman on the Moon 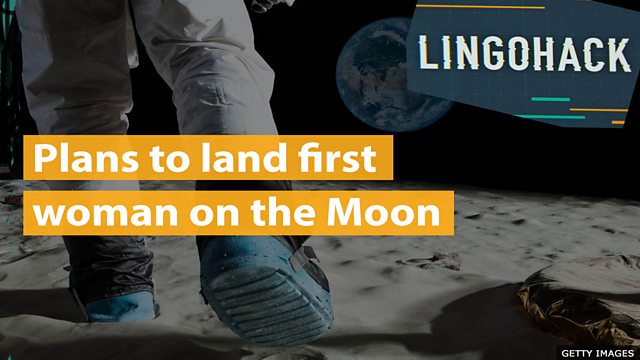 Plans to land first woman on the Moon

sustainable – able to continue for a long time

conduct – perform; do something

collaboration – partnership; working with others

discoveries – finding and learning things for the first time

When is Nasa planning to land a woman on the Moon?

This will be the first human Moon landing during the lifetime of three quarters of the world's population.

Nasa’s fast-tracked its exploration plans in the hope of establishing sustainable exploration by the end of the decade.

The lucky astronauts will have these modern spacesuits with greater flexibility to conduct science experiments on the Moon.

The first woman on the Moon, who will instantly become a household name and source of inspiration, hasn't yet been chosen.

Nasa says she will be somebody currently in the astronaut corps who has flown to the International Space Station already.

Laura Forczyk, founder of Astralytical
Oh it's fantastic - this is a long time coming. We've been wanting to get back to the Moon for decades now. And, in a way, it's a perfect time because we're not only going as the United States of America, we're going as an international collaboration.

Voice of Neil Armstrong
It’s one small step for man – one giant leap for mankind.

Neil Armstrong's first steps in 1969, not only won the space race for America by beating the Soviet Union but provided a giant step in understanding for science.

So what happens next? Lawmakers have already allocated 600 million dollars towards the lunar lander, but Nasa will need a total of 3.2 billion to develop the vehicle in full.

Next will be an uncrewed test flight of the powerful new rocket and Orion spacecraft around the Moon, called Artemis-1, in the autumn of 2021 for about a month.

Then we’ll see Artemis-2, a repeat trip around the Moon, but this time with astronauts manually piloting it.

Later in the decade, Nasa hopes to establish a base for humans called Artemis Base Camp with the infrastructure for long-term exploration of the Moon.

Nasa hopes this return to the Moon will not only uncover new scientific discoveries and economic benefits, but inspire a new generation of explorers as one giant leap for womankind.

When is Nasa planning to land a woman on the Moon?

The mission to land a woman on the Moon, called Artemis-3, is planned for 2024.