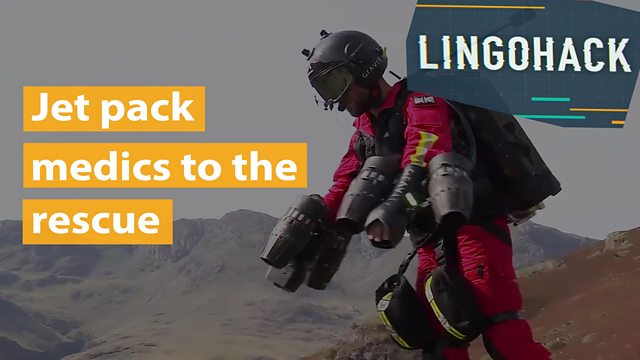 paramedic – person trained to give medical help in an emergency

It was one man's dream to fly and an emergency service's desperation to reach critically ill patients much quicker that's led to this.

A test flight for the Great North Air Ambulance Service, that they hope will lead to them launching the world's first jet suit paramedic.

Andy Mawson, Great North Air Ambulance Service
You know, we're not talking about big distances but we're talking about steep gradients. And that's the difference. You know, personal experience of carrying medical kit up the side of a mountain in the Lakes (The Lake District, UK), to get to someone having a heart attack is so difficult. But, you know, we're fairly confident that with a rapid response car and a jet suit, that we're going to really reduce response times in the area.

The jet pack can fly for around five minutes. But this flight in the Langdale Pikes (UK) took just 90 seconds to reach the location - a journey that would've taken around 25 minutes on foot.

Andy Mawson
If somebody had a cardiac arrest on the top of Helvellyn (a mountain) and we were able to deploy the jet suit, I'm confident that we'd have a defib (defibrillator) on that patient within eight minutes. Right now, our aircraft would probably be the first on scene obviously and that might take maybe 20-25 minutes.

Richard Browning was wearing the jet suit he invented to show the ambulance service how it worked.

Richard Browning, jet pack pilot
They work by using micro jet engines, so pretty much the same things that you have on a jet aircraft, you know, jetliner. There's two on each arm, one on the back. And the way that they then blow so much air downwards, allows you to then lift off the ground. And then all the manoeuvrability is actually down to using your own natural human balance and coordination. If you point them increasingly downwards, you go up and if you flare them out, you come down again.

The Great North Air Ambulance Service is now in talks to make modifications to the jet suit - with the hope of sending a paramedic up to reach their first patients by next summer.

This jet pack was invented by Richard Browning