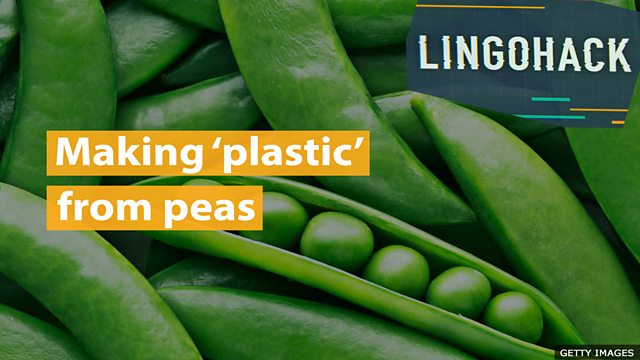 engineer (verb)– to design, develop and build something

perfect (verb)  - make something work without any faults

microplastics – very small pieces of plastic that can harm the environment

Everyone in this lab is full of plastic. Well, their lab coats are anyway.

A lot of our clothes are full of tiny little balls that have got fragrance inside - it’s what makes them smell so nice. Now, normally they’re made of plastic, which washes into the environment and stays there for decades. What if you could make them out of something that’s better for the planet, like peas?

This is the first company in the world to engineer plant protein into a material that does the same job as single-use plastic. Things like the microcapsules that you’d often get inside fabric conditioners or cosmetics.

Anne Jacobs, biochemist, Xampla
At the moment, the microcapsules contain plastic which would not degrade and last for ages in the ocean. Our capsules were made of protein and would be eaten by fish eventually.

It’s taken 15 years to perfect the process. Here they’re using peas, but you can use other common plants including potatoes. Eventually it comes out as a liquid that can be made into plastic-like sheets.

Dishwasher tablets, sandwich packets, sweet wrappers - all made of something that biodegrades naturally in a matter of days.

Richard Westcott, BBC correspondent
Is there a danger you’re just replacing one problem with another. So farmers who should be growing food are actually going to grow peas to make plastic and then we don’t have enough food?

Simon Hombersley, CEO, Xampla
There are a lot of waste products already in the farming process that have got very low value or even are just ploughed straight back into the field, that can be sold on and used to make our kind of materials. Single-use plastics and microplastics don’t need to be made from fossil fuels. There’s something very wrong about making materials from oil that last just for a minute or two.

It’s thought the average family washes around 14 million tiny plastic balls down the drain each week. Several countries are in the process of banning them. Now there’s a way of swapping that harmful plastic for something made from peas.

No. Other common plants including potatoes can be used in the process.