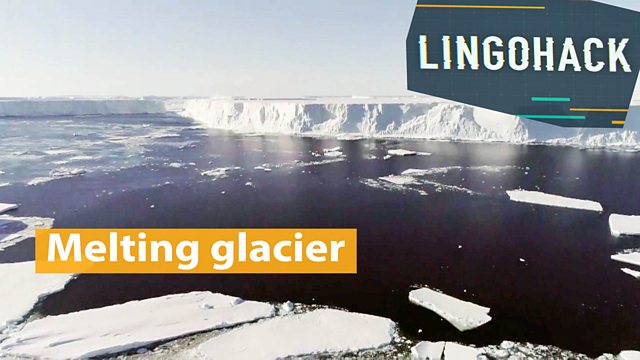 rate – speed at which something happens over a period of time

quickly – at a fast speed

What is this melting glacier called?

This one Antarctic glacier is the size of the UK and is already responsible for five percent of world sea level rise. And the rate the Thwaites Glacier is melting has accelerated fivefold in the last 30 years.

Last year, a team of British and American scientists set up camp on the glacier. It is one of the most remote places on Earth.

By measuring the gravitational pull of the seabed under the ice, they discovered a network of deep channels, a key step in understanding why the glacier is changing so rapidly.

This is what they think is happening. A series of huge channels - some almost a kilometre below the ice - allow the warmer, deep ocean water to flow up to the front of the glacier, melting it increasingly rapidly.

Another team of scientists worked from an icebreaker ship at the front of the glacier. Exceptional sea ice break-up last year, meant they could survey over 2,000 square kilometres of the sea floor in front of the Thwaites ice shelf.

Kelly Hogan, Marine Geophysicist, British Antarctic Survey
It's so important to understand what's going on in Antarctica today, particularly these big glaciers like Thwaites, because they are changing really quickly as the climate warms and as they melt, they are feeding more and more water to our global oceans, which is increasing the rate of sea level rise.

There is up to three and a half metres of sea level rise locked up in the ice here in West Antarctica. That's enough to reshape the map of the Earth, flooding many of the world's greatest cities.

Understanding why this remote area is changing and how quickly it will do so, is essential if the world is to prepare for the rising waters to come.

What is this melting glacier called?

It is called the Thwaites Glacier.