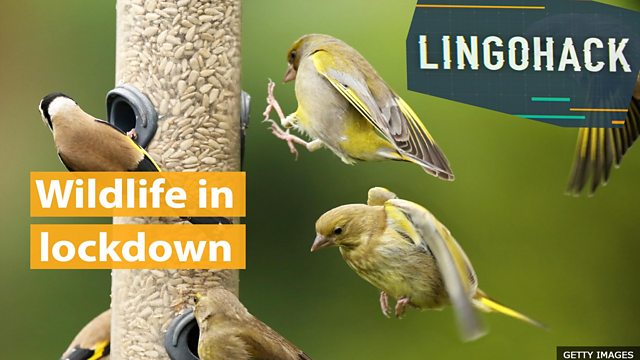 migrations – movements of animals from one place to another

inform – influence; have an effect on (something)

There's plenty of video evidence on social media that wildlife might benefit from lockdown. And while it's been for tragic, costly reasons, we've pushed the pause button on human activity all over the world.

On an increasingly crowded planet, wildlife scientists think that this will have some profound effects. The only way to measure that, though, is with lots of bio-loggers.

Professor Christian Rutz, University of St Andrews
A bio-logger is a small electronic device that can record, store and in some cases automatically relay information, so that information could be positional information - we can find out through satellite tracking where an animal goes and what it's up to.

This animation shows just how much information those tiny trackers can gather. It shows more than 1500 birds’ movements and migrations logged over a decade.

Studying human absence is more tricky, though. One famous study in the Chernobyl exclusion zone that I visited with scientists last year, has revealed how nature took over a landscape that was abandoned after the nuclear disaster.

Now, though, in dozens of ongoing studies, wildlife researchers have their trackers on species from African elephants to migrating cuckoos, and some of that data has been automatically uploaded throughout lockdown.

Professor Christian Rutz, University of St Andrews
And so this really is that an unprecedented opportunity to investigate this relationship between humans and wildlife and we hope that the insights this project will generate will help us to then inform future planning and there are some very specific recommendations that could come out of this.

This pause has been at huge human and economic cost, which is why scientists say it's important to maximise what we can learn from lockdown, about how to share the space we have with many other species.