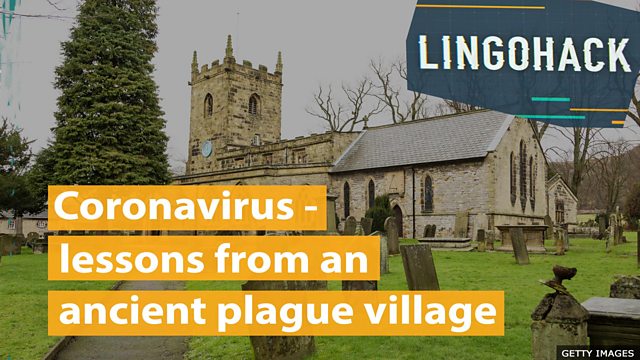 isolate – keep away from other people

measure up – be as good as someone else

close-knit – caring for and helping each other

humanity – a kind and caring attitude towards each other

How many people in Eyam died during the plague, 350 years ago?

In a crisis that reaches everywhere, even the remotest places could have lessons for us all. In Eyam in Derbyshire (UK), the memory of lives lost centuries ago is motivating a response in the present.

These are the names of long-dead villagers who, 350 years ago, became infected with plague and sealed themselves off to stop the disease spreading. 260 villagers died.

It was the rector, William Mompesson, who inspired his people to isolate and save others. Today, the rector of Eyam is himself in quarantine, as his wife has symptoms of coronavirus.

Fergal Keane, BBC reporter
Are you awed or inspired by the example of your predecessor, centuries ago?

Reverend Mike Gilbert
Often when I walked through church and seen his name on the rectors’ board, I thought 'I wonder what would happen if it happened today and how I would measure up?' and I guess I'm finding that one out now.

Next door in the village school, the headmistress is preparing to send most children home. Eyam school will stay open for the children of key workers in the health and emergency services. It is in the nature of this close-knit place that many children have grandparents who either live with them or nearby.

The village committee is now visiting the elderly - like ninety-five-year-old widow Sheila Vipan. In World War Two, Sheila was evacuated away from her parents for four years. She's known this nation's darkest hours.

Sheila Vipan
That's right. I've got to be a bit careful, at 95. Try and do things that help one to smile or to laugh even. I've just fed the birds. Yes, I must keep them happy.

Here, they're determined not just to endure this crisis, but, with humanity, to transcend it.

How many people in Eyam died during the plague, 350 years ago?