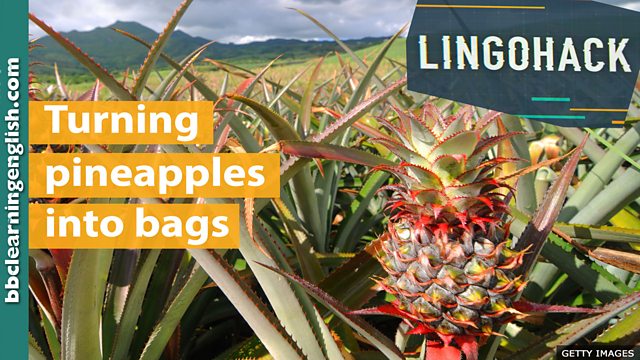 penny –  the smallest unit of UK currency (the pound sterling)

set you back – cost you a particular amount of money

What does the reporter compare the feel of the pineapple leaf fabric to?

Picking pineapples can be arduous, heavy work often with little reward. The price paid for each individual fruit is a fraction of a penny.

The leaves from pineapple plants are usually thrown away. A use for them has now been found, turning the leaves into fabric – which provides some extra income for workers.

Ben Patton, designer for Materia Products
I think everybody was quite surprised that the fabric was made of pineapple. Because it doesn’t smell like pineapple, it’s not spikey, it's got a nice texture to it. So it’s quite an unusual thing to be working with.

To make the fabric, fibres are extracted from the leaves. These get sent from the Philippines to Spain. Once there, machinists complete the process of turning them into a material which has been named 'Pinatex'.

An online shop based in Cambridge has begun using Pinatex to create handbags, satchels and purses.

And these are the finished bags. If you want one, they’ll set you back around 137 pounds. The texture is slightly crinkled – not too different to some leathers.

As manufacturers become more confident using the material, it’s hoped more items will be made out of it in the future, making use of pineapple leaves that were otherwise destined to be wasted.

What does the reporter compare the feel of the pineapple leaf fabric to?

The reporter compares its feel to some types of leather.