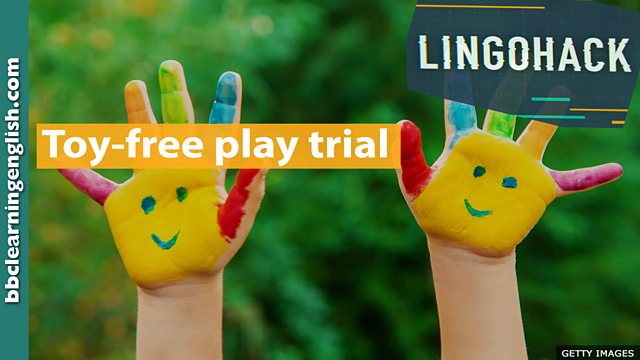 dexterity – ability to use the hands to perform difficult tasks skilfully

deprive – take something from someone; prevent them from having something

How long did this toy-free trial last?

It's playtime at this nursery in Bristol – magnets, metal, and imagination.

Prof Paul Howard-Jones, University of Bristol
Well, I think that's fascinating because that's not a toy that’s designed for a child to use, so it's actually quite difficult for Aida to dislodge the bit of metal from the magnet. She's learning skills of dexterity that she might not learn with a toy that was designed for a two year old.

Here shells, boxes and shiny envelopes are allowed. But these aren't, and were locked away in a cupboard for a month.

Matt Caldwell, Ilminster Avenue Nursery School
There were some of the older children at the end of the month who said "We really would like our trains back" and our purpose was never to deprive the children, so of course they had them back after the month, but two year olds - they don't want any of this back at all. And I’d also says it’s interesting what you’ve picked up because you've got a female queen and a very male, muscular superhero. Gender is something that can be reinforced through toys.

Having observed the children for the one-month trial earlier this year, staff here say that 75 per cent of the two year olds used more imagination in their play.

In one three-year-old class, more than half used their imaginations differently. And in another group, between a quarter and a half of boys communicated more imaginatively.

So, this is the nursery with very few toys. Although they will play with anything else, including BBC camera equipment!

How long did this toy-free trial last?

The children were observed in a one-month trial.