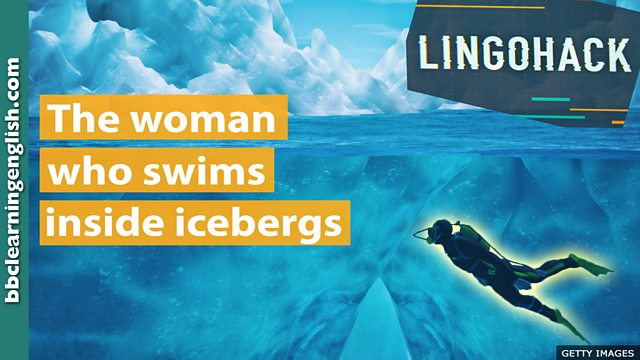 adrenalin junkie – someone who enjoys dangerous sports and activities

rescue – save someone from a dangerous situation

dangerous endeavour – risky or hazardous attempt to do something

A lot of people think I'm some sort of a fearless adrenalin junkie. But I’m not fearless, I’m scared all the time.

I have led the team to be the first people to go cave diving inside an iceberg. And we did that in Antarctica - so far away from help that there’s certainly no one around to rescue you if something goes wrong.

And during those dives inside this unbelievably dangerous and shifting environment, we got pinned down by a ripping current that was like trying to walk against a hurricane-force wind except there we were under water, underneath an iceberg, trying to swim against a current that was too strong to make any headway to get out of this ice cave.

I've learned to deal with fear - terrifying, mind-numbing fear. So it's really important for me to just stop, take a very deep, low breath.

These caves that I get to swim in are like museums of natural history. They hold evidence of global climate change. They contain the remains of civilisations that are no longer here on Earth and even the bones of paleo animals that are now extinct.

So, these environments are beautiful. They're wondrous and they have so much teach us about science. I don't know what a retirement would look like for me because I'm already doing the things that I love to do every day. I know it is a dangerous endeavour that I'm involved in. But I don’t see any near, you know, end to what I am doing.

She stops and takes a very deep, low breath.