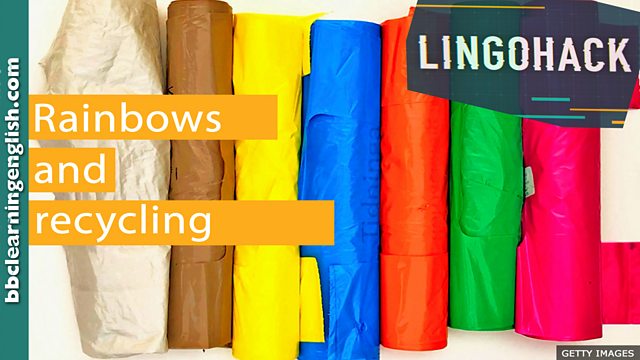 jumbled up – mixed in an untidy or chaotic way

separate – move things apart from each other

Rainbow-coloured rubbish. This is the colourful waste created by a Swedish city with a unique recycling system. Like many cities in Sweden, Eskilstuna has an impressive recycling record. It met the EU's 2020 target of recycling 50% of waste many years ago.

But almost everyone who lives here follows a strict recycling policy at home. People are expected to sort their household waste into seven separate categories, including food, textiles, cartons and metal. But what really makes the system stand out is the bright colour code.

The reason for this becomes clear at the city's recycling plant. The bags arrive all jumbled up because they're collected altogether, once a fortnight from outside people's houses.

But thanks to those bright colours, scanners can select the bags and separate them efficiently. The food waste in green bags is processed on site into slurry to make bio gas, which powers the city's buses. One of the benefits of this method of recycling is that there is less cross-contamination, so more of the recycled waste can actually be used to make new things.

Like the rest of Sweden, Eskilstuna is committed to sending zero waste from its citizens to landfill. Waste that cannot be recycled is incinerated at a local plant to generate electricity. This reduces reliance on fossil fuels, but does create greenhouse gases.

As countries around the world try to improve their recycling rates, some may look to Eskilstuna as an example to follow - as long as they think they can persuade their citizens to get busy sorting at home.

Once they arrive, scanners select the bags and separate them efficiently.