The Amazon and climate change 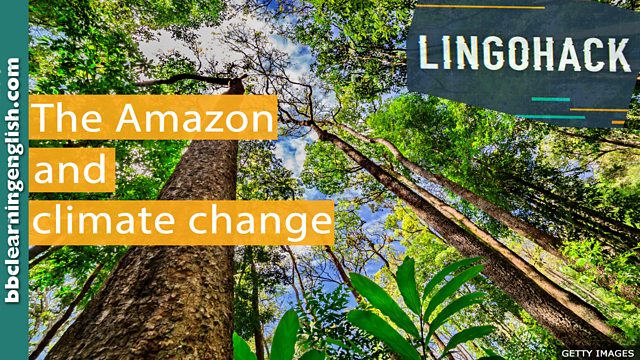 The Amazon and climate change

heating up –making something hotter

deforestation – destruction of forests by people

What happens to the Earth's climate if trees are cut down and burned?

This must be the hardest way to investigate why the trees of the Amazon are so important - climbing right up into them. Down on the ground a scientist, Erika Berenguer, is asking for samples of the leaves.

Erika has studied the same batch of trees for ten years now, measuring exactly how they're growing and how they affect the climate. This matters to the whole world because of sheer size of this forest.

We've used graphics to show how the billions of leaves are breathing in carbon dioxide - a gas which is heating up the planet.

As human activity keeps adding more and more carbon dioxide to the air, magnificent trees like this pull a lot of it in. But chop it down and burn it, and all the carbon that's been stored inside over the many years is suddenly released back to the atmosphere, which of course increases the speed of global warming.

In the last few months, the rate of deforestation here has suddenly increased. The new government of Brazil wants to encourage development. So Erika's research is all the more urgent.

In this lab, she studies the leaves collected from the forest, to work out how much carbon the Amazon holds. It's the equivalent of America burning fossil fuels for nearly a century.

Dr Erika Berenguer, Oxford Environmental Change Institute
We're never going to be able to build an Amazon. It's going to be gone forever. So once it's gone, it's just gone.

All that's left where forest once stood. A stark reminder of what's vanishing, and of consequences for the rest of the world.

What happens to the Earth's climate if trees are cut down and burned?

The carbon stored inside the trees will be released back to the atmosphere and speed global warming.