Extreme weather: Is it caused by climate change? 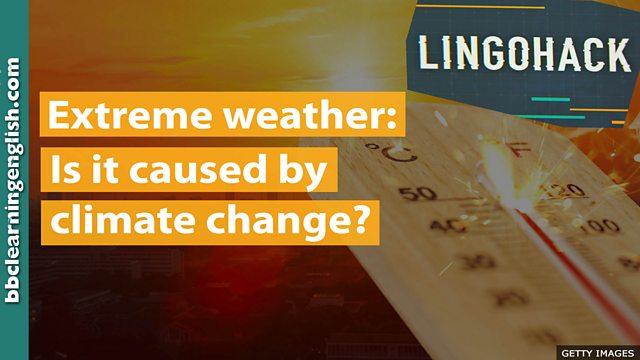 heatwaves – periods of time where it’s hotter than normal

drought-resistant – able to survive in long periods of dry weather

baking – being heated to a high temperature

Temperatures were among the highest in the UK [today] here at Kew Gardens [in London]. A scorching 37.7 degrees [Celsius]. So those who braved the sunshine came prepared. And climate scientists are now confident that heatwaves are more likely and more extreme because of climate change.

Professor Liz Bentley, Chief Executive, Royal Meteorological Society
The fact that we've seen these temperature rises, the baseline temperature has increased by about one degree globally since pre-industrial times and it's that level that just means… in normal conditions we’d see heatwave conditions and temperatures around, kind of just above average, but you add that extra layer of heat on, that's when we start to break those records.

And globally over the last century the trend is clear - it has been heating up. The last four years were the warmest ever recorded. For the future, the temperature increase depends on global carbon emissions.

Current targets that governments have signed up to to limit those emissions will see a rise of about 3.3 degrees by 2100. Under the Paris Climate Agreement - that's the more ambitious deal signed up to by almost 200 countries in 2016 - the aim is to keep that below 1.5 degrees.

Today of all days we've come to the hottest glasshouse in Kew Gardens [because] this is where all the desert-adapted plants live. And even for these plants they've opened all of the windows to try and get some ventilation in here, because according to my thermometer it is now more than 39 degrees in here. And these plants are adapted to the hottest, driest conditions on Earth.

It's those adaptations that scientists here are studying in order to work out how we might grow more drought-resistant plants in the future. While the collections here look exotic, they contain plants that could eventually become familiar food crops.

Dr James Borrell, Plant Ecologist, Kew Gardens
Days like today tell us that if we carry on doing exactly what we've done in the past, then that that's not going to work. So we're going to have to adapt what we do and potentially adapt the crops we grow, and so we need to be exploring, we need to be researching, we need to [be] understanding our options so that we can change, as climate begins to bite.

With the gardens baking in the Sun today, the preparation continues for a warmer, more uncertain climate in the future.

Under the Paris Climate Agreement the aim is to keep the rise in global temperature below 1.5 degrees.