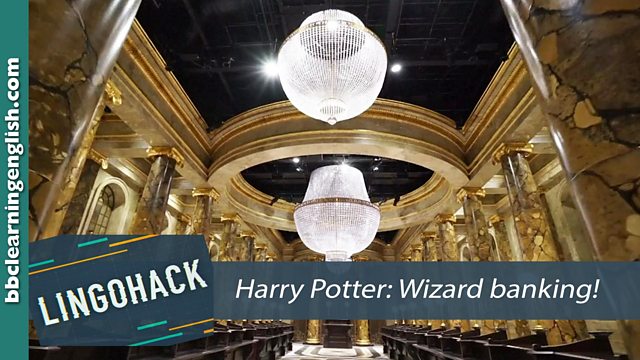 currency – type of money used in a particular country or region

profits – money a business makes after paying its costs

What is the treasure used in the bank, made of?

Take a look inside the hallowed halls of Gringotts Wizarding Bank - underneath the crystal chandeliers, flanked by impressive marble pillars. But this isn't magic. It's real life.

Warwick Davis, actor
It's fantastic being back here on the original Gringotts Bank set, where over ten years ago now, I played Griphook here - this guy down the front; the good-looking one!

And as seen on screen, to the finest of details, gold-lined treasures and piles of Galleons - the wizarding currency. But thieves - be warned! It wouldn't be Gringotts without goblins.

Warwick Davis, actor
It was a real restoration process for you, wasn't it? To bring all of these back to life and back to kind of camera-ready condition. You know, because these sorts of products deteriorate very quickly in storage, so it's quite a feat to actually see them here looking as good as they do.

Sarita Allison, make-up artist
Everything you see here, we've made especially for the tour.

Included in the tour is a sneak peek inside the vault of dark witch Bellatrix Lestrange. And you won't need Polyjuice Potion to enter.

Pierre Bohanna, prop maker
There's about 38,000 pieces of treasure, of rubberised treasure, that was originally made.  As you can see by example, here's a Hufflepuff cup – you see it's all squidgy.

Warner Brothers has good reason to include a bank in the latest renovations of the studios, just outside London. The behind-the-scenes tour boosted the studio's profits 69 percent in 2017, generating after-tax turnover of 60 million pounds. But with goblins in charge, a profit like that will surely be buried deep within the vaults of Gringotts.

What is the treasure used in the bank made of?

It is rubberised – it’s made of rubber.